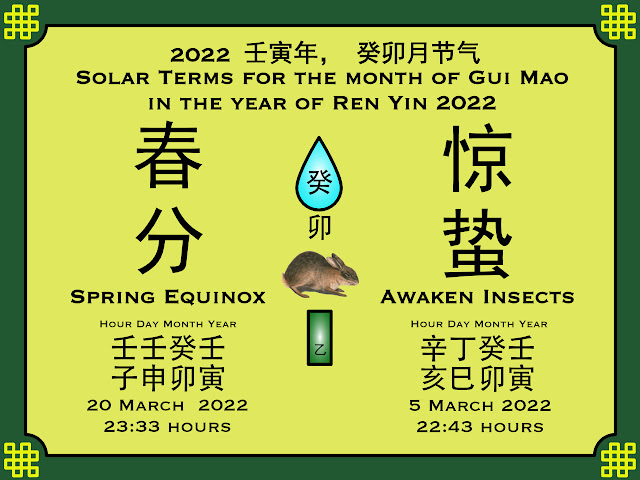 We have already moved into the second month of the year of the Water Tiger, Ren Yin 2022 in the Chinese luni-solar calendar on 5 March 2022.
The beginning of the month is marked by the Solar Term "Jin Ze" or translated as "Awaken Insects" that started at 22:43 hours on the 5th of March, 2022.
In the Chinese luni-solar calendar, the 60 sexagenary pairs sequence alternate on a Yin - Yang - Yin - Yang basis, and so while February was a Yang Water Tiger month, March is a Yin Water Rabbit month. April will be Yang month again, and so on and so forth.
The elements of the month are Water (癸 Gui / Yin Water) and Wood (卯 Mao / Rabbit).
You may be wondering why the name Jin Ze / Awaken Insects was used to name this second month. The ancient Chinese observed the natural phenomena in their surrounding environment. It was observed that insects were beginning to awaken from their winter hibernation, and hence gave this name to the second month. It is useful to note that it is not the other way around, as in, the observed phenomena of insects awakening from hibernation and hence it is the second Solar Term month. China covers a huge geographical area with varied weather systems according to the latitude. The months are calculated on the solar path of the earth's orbit around the sun (via Gnomon stick sun shadow recording) and then names assigned (and not via observed seasonal phenomena). To further explain, Gregorian calendar months are named after Roman gods, leaders, festivals, and numbers. It does not mean that if you don't have Roman gods, leaders and festivals then the calendar is not applicable.
Spring Equinox falls on 20 March 2022. Due to the tilt of planet Earth's axis, the various geographical zones on the surface of the planet experience seasonal changes, caused by the changing amount of sun light and heat received. On the day of the Equinox, planet Earth gets approximately equal 12 hours of day and night. Also the sun rises exactly at cardinal due East direction (90 degrees) and sets at cardinal due West direction (270 degrees).
In Ba Zi birth chart analysis, we use the Day Master element (the Tian Gan representing the day of your birth) and compare it with the year's and the month's elements to get what we call the 10 Spirits / 十神 / shi shen. From the 10 Spirits, we can decipher the signals and information from the universe according to one's Ba Zi chart for the annual and monthly dimensions. You can go deeper into the day and the si-chen (2 hour block) but usually the annual and 10-year pillars are cover sufficient grounds already in a Ba Zi birth chart appointment.
Book your Ba Zi appointment today.
at March 07, 2022 No comments:
Labels: 2022, 60 Sexagenary Pairs, BaZi, Gui, Lunisolar calendar, Mao, Rabbit, Sexagenary Pairs, Spring Equinox, Tian Gan, Water Rabbit, Yin Water
Older Posts Home
Subscribe to: Posts (Atom) 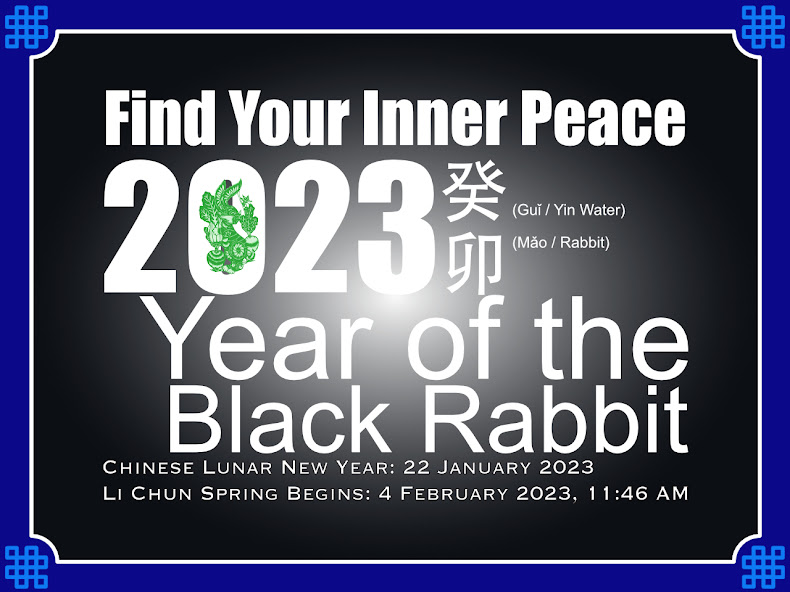